Genesis 12:1
Now the LORD said to Abram, "Go forth from your country, And from your relatives And from your father's house, To the land which I will show you; 4 So Abram went, as the Lord had told him; and Lot went with him.

Hebrews 11:8 By faith Abraham, when called to go to a place he would later receive as his inheritance, obeyed and went, even though he did not know where he was going.

Later, Abraham's faith was tested even further.
Click to expand...
Abraham was saved because he believed God. Not because he worked.

Have you never ever read romans 4?

GandalfTheWhite said:
Gandalf tiptoe into minefield… Gandalf tiptoe out of minefield.
Click to expand...
Hey Bro!! Be carefull, they are launching rockets now!!

YourTruthGod said:
The church I belong to is the body of Christ.
Click to expand...
Lol. Another one who peddles works and refuses to give his denomination.

Lol. How can we have faith in you if you can not even be honest?

Magenta said:
Thank you, David
Click to expand...
Happy Birthday Sis!! I pray it is blessed!

YourTruthGod said:
That is not in the Bible, it is what false teachers say like a mantra.

The reward is eternal life with God. Do you not know the scriptures?
Click to expand...
Since my first post messed up. Will try again.


The gift of God is eternal life (Gods words not mine)

The defenition of grace is favor or mercy.. When you show grace to someone, You show mercy, And it all comes out of love..
T

GodsGrace101 said:
TheDivineWatermark said:
EDIT: ^ ... conveyed in English versions, but in the Grk "having offered [aorist]"
Click to expand...
Another Greek export.
We have so many on this thread.
Could you explain the aorist tense to us?
Click to expand...
First, you should understand what my EDIT referred to. It was in reference to my last sentence, in the brackets (of the previous post), and that had to do with the wording in Verse 21, where it says, "...having offered [aorist participle active] the son of him upon the altar."

Now, if I said a sentence using the phrase "having brushed his teeth," would you automatically assume it is speaking of the moment in his babyhood [distant past] when his first tooth poked through? or at some later point? and... "having brushed" means, after he has done even that, right? (not before he has even brushed his teeth, in a certain context, right?)

Perhaps this can be an initial help to you, in understanding the perspective I presented. May God shed His illumination on the subject, to the readers. God bless the reading of His Word.

GandalfTheWhite said:
Gandalf tiptoe into minefield… Gandalf tiptoe out of minefield.
Click to expand...
It is good to see you posting again my friend. You quick zany wit has been sorely missed.

tourist said:
It is good to see you posting again my friend. You quick zany wit has been sorely missed.
Click to expand...
Hi Tourist. Thank you. I really missed all of you guys and girls

eternally-gratefull said:
Not of works lest anyone should BOAST.

The GIFT of God is eternal life
You should recognize these two words of God quite well. They contradict what you believe.
Click to expand...
The gift of God is only to those who believe Him, that He can transform them into saints
of the Kingdom.

"Woe to me!" I cried. "I am ruined! For I am a man of unclean lips, and I live among a people of unclean lips, and my eyes have seen the King, the LORD Almighty."
Then one of the seraphs flew to me with a live coal in his hand, which he had taken with tongs from the altar.
With it he touched my mouth and said, "See, this has touched your lips; your guilt is taken away and your sin atoned for."
Isaiah 6:5-7

We must be changed the sin within burnt away.
Isaiah though he was a man of God, a prophet still he needed cleansing.

GandalfTheWhite said:
Hi Tourist. Thank you. I really missed all of you guys and girls
Click to expand...
Wb Bro, Have missed you alot.. Sadly not much has changed

eternally-gratefull said:
Wb Bro, Have missed you alot.. Sadly not much has changed
Click to expand...
Thank you

I came to the conclusion that with over 40 000 Christian church denominations we will never be able to agree... until Christ's return

I came to the conclusion that with over 40 000 Christian church denominations we will never be able to agree... until Christ's return
Click to expand...
And this is how it should be. We have the freedom of expressing Christ within as we bring
praise before His throne. Some are quiet, some loud, some appreciate ceremonies, others guitar,
others organs and hymns. When we meet Him face to face, then our song will never end, Amen.

I came to the conclusion that with over 40 000 Christian church denominations we will never be able to agree... until Christ's return
Click to expand...
This is the reason the catholic church has the pope. I believe thats the reason why these big church organizations were started back in the days. Once you get millions of members, you need centralized leadership to keep it together, and in a time where nobody knew how to read and was blind as a bat, it was all about what the guy in the robe said!

Even after the reformation, the lutherans came out with their own catechism and augsburg confession which condemns a bunch of stuff modern day protestant believe, like premillennialism.

I came to the conclusion that with over 40 000 Christian church denominations we will never be able to agree... until Christ's return
Click to expand...
I agree..

dcontroversal said:
Another 7th day"er" or a Pharisee.....one that has no concept of context....again we see James yanked out of context to peddle a false dogma.....turn the light on and here they come
Click to expand...
That last line you wrote...there's a scripture that says the very same thing. The kingdom of heaven is like a tree that grows up and the birds come and lodge in the branches.

We sometimes read this as a good thing...until we look at the concordance. Was posting from memory.

It's the same thing with a move of God on earth. Demons are drawn.

stonesoffire said:
I'm always behind...sigh.
Click to expand...
Dont worry hey, the first shall be last, the last shall be first!

eternally-gratefull said:
Happy Birthday Sis!! I pray it is blessed!
Click to expand...
Thank you, EG It was almost two weeks ago, and I did have a lovely day, and this year is shaping up to be quite remarkable and memorable as well I turned 64 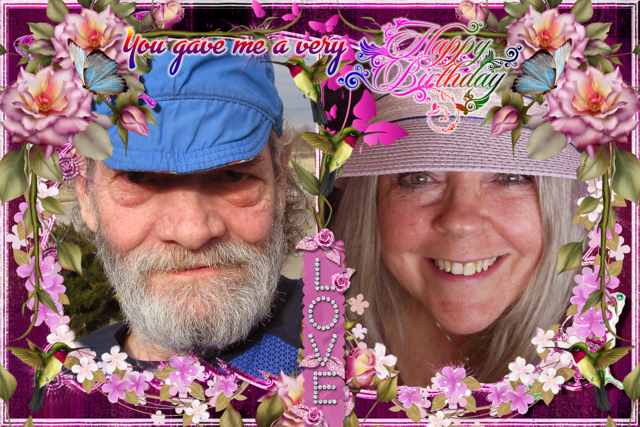 AAARGH! I was at the gas station drinking coffee and eating my lunch and there was a song playing thats now haunting me!
Anyone ever get those?

Hevosmies said:
AAARGH! I was at the gas station drinking coffee and eating my lunch and there was a song playing thats now haunting me!
Anyone ever get those?
Click to expand...
Yeah when it takes me back to a time I do not want to remember!
You must log in or register to reply here.
Share: Facebook Twitter Google+ Reddit Pinterest Tumblr WhatsApp Email Link