The Beast is arising

I admit that although I've studied Scripture for over 40 years that I still don't know Revelations well. That's all changing fast and I'm scrambling to learn it.

That said, I know enough that I can see the Beast system arising around us. I not only see it - I sense its evil. Has anyone else had this uneasy feeling? We are now in a Police State. Police have been militarized (are tanks and takers and war equipment necessary against the American people?) and every day we read of accounts of police badly abusing and killing innocent citizens. This was perhaps driven home more to me since I experienced it: police shot to death my neighbors unarmed grandson. I learned about how they protect their own. A judge threw the family's lawsuit out - most likely because he was white. Blacks do have an advantage because they stick together and there is an uproar if a black is abused or killed. It still goes on unabated however as I spoke with a young black man in the hospital who told me that he and his friends are constantly abused by police. Very nice young man. It made me sick.

Not only that but my brother was beat up and robbed by police and my friend's daughter was sexually assaulted by them. They are now a system of thuggery in some places. So we have a beast system built around us and if you haven't experienced it yet...you will. Matt Agorist at The Free Thought Project carries unbelievable stories of police abuse of citizens. I'd like to make a point here that >>>this is a sign of a Nazi-like regime where the citizens have no power against the beast system.


Next there is technocracy: everything you say and do is captured by the beast government to use against you later. Cameras record many of your activities, license-plate readers record your whereabouts, and the coming ID 2020 will control even more.

The idea is that the state - or beat system - can turn off your access to money if you don't comply with the beast.

Chuck Baldwin said this is going to be a difficult year ahead: 2021. We'll be facing the beast.

Perhaps someone else well-versed in the end times can explain where we are on the spectrum of end times. Are we in the tribulation right now?

Do not chide yourself over not understanding Revelation. I have studied the Word for over fifty years, and we share the same boat.

The truth is, I will not attempt to interpret Revelation for myself, and God forbid, for others. I believe you and I will see clearly when our Blessed Lord reveals His Word to all at once.

As for the beast. It has been clear to me the world without Yeshua-Jesus is lost, evil and worse. We have seen many previews of the Beast and the Tribulation over the centuries, however now it seems the servants of Satan are running most, if not all governments on this tired old planet.as

It is bad everywhere, with people believing lies as foretold. Keep faith, and look to His Light,, for here the light is waning very fast. May you be blessed, comforted and counseled always by our blessed Maker.

saintrose said:
Are we in the tribulation right now?
Click to expand...
No. All Christians will be raptured and the identity of antichrist himself shall be made known. Having said that, I believe we are very close. Let our lamps be trimmed and burning and full of oil.

Where ever we are on this planet, things get tougher. The relatively small freedom we enjoyed is slipping away from us. I believe there is no change of nature of the beast state, whatever form, now it's just getting more obvious in the west.

I would mind you to ponder this very scripture and give some thought about how it applies even in our age.

[1] Then was Jesus led up of the Spirit into the wilderness to be tempted of the devil.

[5] Then the devil taketh him up into the holy city, and setteth him on a pinnacle of the temple,
[6] And saith unto him, If thou be the Son of God, cast thyself down: for it is written, He shall give his angels charge concerning thee: and in their hands they shall bear thee up, lest at any time thou dash thy foot against a stone.
[7] Jesus said unto him, It is written again, Thou shalt not tempt the Lord thy God.
[8] Again, the devil taketh him up into an exceeding high mountain, and sheweth him all the kingdoms of the world, and the glory of them;
[9] And saith unto him, All these things will I give thee, if thou wilt fall down and worship me.
Click to expand...
As you can see there is a certain worship involved in worldly powers. You can ask yourself what the connection is between governments, worldly rulers and the masonic lodges, for example. Now, I am not sure that your local politician worships the devil. I dunno. But I do think that at the higher levels of power in this world, there is this connection. Of course they are waiting for their time, aren't they?

I too sense a demonic spirit in many individuals who have maneuvered themselves into positions of authority on the local and individual level. It does seem to be spreading at a rapid pace.

'Abomination of Desolation'..............sinister and far reaching implications.
Being witnessed are events of a magnitude that has to end...we know not when or how,
it is most conceivable an abomination has reached an ominous presence within the
total governmental ranks. With no resolve possible with this incurable abomination.
The nature of time will play out." 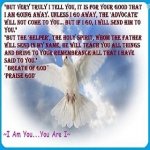 saintrose said:
Perhaps someone else well-versed in the end times can explain where we are on the spectrum of end times. Are we in the tribulation right now?
Click to expand...
As you read the following, please try to understand - and keep in mind - that the most popular opinions about End Times prophecy are in error.

We are near the End.

Revelation prophecy, along with Olivet Discourse prophecy, has been "unfolding" over the past ~2000 years.

And, the prophecy of neither place in scripture is simply "listed" in chronological order like some would have you believe.

Some, but not all, of the prophecy is past history.

Some of the 'seals' have already been "opened" in history.

None of the 'trumpets' have occurred.

None of the 'vials' have occurred.

(It must be read and understood based on God's time scale.)

Revelation 13:7 is describing the Dark Ages.

The souls under the altar in Revelation 6:9 are the martyred saints from the Dark Ages.

The other group of saints in Revelation 6:11 that "should be killed as they were" are the martyred saints referred to in Revelation 13:15. (yet future)

Both groups of saints are 'tribulation saints'.
G

The parenthetical statements in Matthew 24:15 and Mark 13:14 are the key to understanding how those verses were indeed fully and properly fulfilled in their proper time.
G

GaryA said:
Yes - we are in the Tribulation now
Click to expand...
No. We have tribulations now, but we are not in the 7 year Tribulation period and we, as the Church, never shall be. We are appointed to rapture, not wrath.
G

oyster67 said:
No. We have tribulations now, but we are not in the 7 year Tribulation period and we, as the Church, never shall be. We are appointed to rapture, not wrath.
Click to expand...
There is no End Times biblical prophetic 7-year tribulation period.

The belief comes from the severe misinterpretation of Daniel 9:24-27.

GaryA said:
There is no End Times biblical prophetic 7-year tribulation period.
Click to expand...
Is. Your denial of future reality will not change it.
G

oyster67 said:
Is. Your denial of future reality will not change it.
Click to expand...
You will understand in time...

(Your denial of the proper interpretation of Daniel 9:24-27 will, in time, show forth its error.)

Just trying to encourage you to take another look at the passage.
G

oyster67 said:
Is. Your denial of future reality will not change it.
Click to expand...
Perhaps I should have said:

Your denial of past reality will not ...

GaryA said:
Just trying to encourage you to take another look at the passage.
Click to expand...
Please read with prayerful-minded thought the 'Seventy Weeks' web page pointed to by the last link in post #10.

"We are in a police state".
Yet police everywhere have been defended, laws have changed removing power from the police to uphold the law and jobs traditionally done by police are being given to unarmed civilians. Not to mention almost daily assassinations of police.
The symbol of the thin blue line has been deemed illegal or hateful, requiring departments to remove it from police cars.
Meanwhile people who riot, destroy businesses, steal, murder, etc... are considered "peaceful protesters".
And crime everywhere has accelerated at an alarming rate. And gun sales have risen because people feel unsafe from all this.
Tell me more about the "police state". 🙄

GaryA said:
Revelation 13:5-7 is past history while Revelation 13:8 is yet future.
Click to expand...
Any proof?
G

Kolistus said:
Any proof?
Click to expand...
When considering Revelation prophecy, you have to "back up" and see/view it from a "wide-angle long-time" scale of things.

Unlike what most people seem to want to believe, the whole of the prophecy is not relegated to a short period of time (i.e. - 7 years or less); rather, it involves a much larger portion of human history - namely, the period of human history between the first and second comings of Christ.

The 'proof' that you seek lies in having this understanding accompanied by the alignment of the propecy with this [larger] period of history.

The following two views are both in error because they believe the whole of the prophecy to be contained in a short period of time:

In truth - some is past and some is future.

The thing that keeps people in error is not letting go of that highly-focused short-term mentality.

You must be able to "back up" (in your mind's eye view) and look at it on God's time scale. Otherwise, you will miss the whole picture - accepting instead a man-made idea with mangled scripture wrapped around it to make it seem like a nice tidy package that is preferred to be believed. But, it is not the truth.

Because people want [too much] to see all of End Times biblical prophecy in the short term - they will invariably and systematically remain in error.