Here we go - Fox News with the conspiracy "theories"

FOX tabloid news at it again 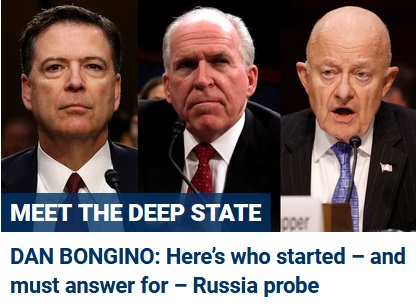 In July 2016, the FBI opened a secretive counterintelligence investigation into Russian interference in the U.S. election. In violation of protocol, the FBI did not inform Congress until March 2017. Inexplicably, FBI Director James Comey said it was because the investigation was “too sensitive,” but this is precisely why law enforcement informs Congress of new investigations.

As I wrote in my book "Spygate," Brennan himself acknowledged that it was he who sparked the FBI’s counterintelligence investigation by passing on British intelligence on Trump associates to American intelligence agencies.

While the GCHQ (the U.K.’s equivalent of the NSA) and the CIA have denied collusion, The Guardian reported that “both U.S. and U.K. intelligence sources acknowledge that GCHQ played an early, prominent role in kickstarting the FBI’s Trump-Russia investigation, which began in late July 2016.”

Assisting Brennan was then Director of National Intelligence James Clapper. Clapper said he had the same “information” as Brennan, and his “dashboard warning lights were on because of that.” With limited information, the FBI pushed the investigation into a full-blown inquiry instead of alerting the Trump campaign of possible danger and stopping any further damage to the electoral process.

Assessing any possible threat is one thing, but pressing into a full investigation without facts of a crime or national security threat violates standard procedure. According to Clapper, the preliminary investigation revealed no probable cause of any collusion, yet the investigation kept following this dead-end trail.


So much for getting back to running the country.
G

have you ever read these men's own word's ??

and , just for your info, the phase " conspiracy theory ' was coined in the mid-60' s by the c I a to discourage anyone from questioning the kennedy assignation .

Thanks for the CIA edumacation on "conspiracy theory" - however, the term was being used well before the mid 1960's:

Exposing error one post at a time is a thankless task.
R

Fox News, CNN, MSNBC, etc... they are all cable "news" shows. They are there for ratings first... not telling the news. Fox and CNN think having political pundits express/debate their opinion is journalism. Sorry, opinion pieces are not news... it isn't journalism. If you really want to watch the news, you wouldn't watch any cable "news" show. If you want to be in an echo-chamber of your own thoughts/beliefs, then you can watch Fox if you're a conservative or CNN if you're a liberal. If you're neither, well then I'd consider real journalistic sources that aren't trying to get hot takes for ratings.

I just see no point in calling out Fox News only when other networks do this all the time as well. Lets call them all out and not the networks we happen to disagree with more.

Locutus said:
Thanks for the CIA edumacation on "conspiracy theory" - however, the term was being used well before the mid 1960's:

You are right. You certainly are keeping us .mere mortals busy with your posts.

Bongino isn't a journalist, doesn't claim to be. It's an opinion piece and is labeled as such.