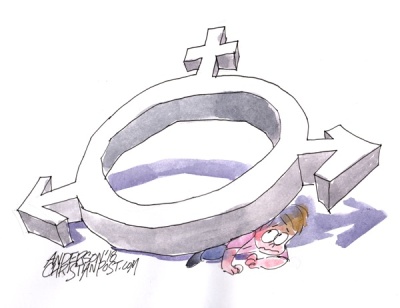 Hospitality is a Christian virtue, and all who follow Christ are urged to covet that virtue, for we are told it is possible that in exercising hospitality, we are entertaining angels unaware. Christians are also called to lovingly proclaim the gospel of salvation to all, irrespective of persons.

However, there are a number of evangelical and reformed spokesmen and women who are urging Christians to be hospitable in a peculiar way toward people who are calling themselves “transgender.” The idea put out by some is that it is hospitable to address transgenders by their preferred pronouns; to give respect to the trans culture that affirms one can determine one’s self to be the opposite of the sex with which one is born. The argument is that by using the pronouns preferred by those who are convinced their sexual being is self-conferred rather than given, Christians thereby demonstrate the love of Christ by accepting the self-proclamation of that person as legitimate.

Therefore, Christians’ hospitality is supposed to include speaking of a male who perceives himself to be female as “she;” using the made-up pronouns of “ze, zim and zir” if those are the desired form of address; or using “they” as a generic term for a “transgender.”
But affirming a language that ratifies mental disorders is not an act of hospitality. On the contrary, affirming the idea that a human being can transition to the sex other than that with which he or she is born is a cruel denial of reality and an added assault against a person already committed to self-harm.
Does naming the new “hospitality” as cruelty disguised as kindness and compassion ruffle some feathers among those who have declared themselves so loving their love exceeds the love of the Creator who made the human race male and female and declared it good?

Let’s be frank. Encouraging a person who has given him or herself a new sexual identity and going along with all the ramifications attendant to that invented identity is to affirm the great harm that person will do to him or herself. It is to encourage them to proceed with life destroying measures such as taking dangerous drugs and subjecting themselves to surgical mutilation.

Is such affirmation of mental illness and denial of reality the way of Christ?

Those who know the stories of the healing of Christ know he would never consider it “hospitable” to encourage the insane and the mentally tormented to remain in the state to which they themselves and others consigned them; nor would he encourage their Christian neighbors to speak the language of the deluded.
Consider the case of the Gadarene man. The gospel of Mark describes him as screaming night and day among the tombs while cutting himself with stones. He mutilated himself in an insane frenzy of self-destruction. Jesus knew the cause and he had the remedy. He knew the source of the man’s mental disturbance, named it for the demon inspired tragedy it was, and then healed the man, who was restored to his right mind. The man got dressed and stopped his self-mutilation. Then he went back to his village to tell everyone about the Christ who healed him by casting out the forces of evil, thus restoring him to manhood.
Jesus did not affirm the man’s mental disturbance and he did not allow him to continue in his insanity. He did not leave him in his complete detachment from reality. Christ did not speak the man’s demonically driven language, but spoke the healing truth to him.

In the same gospel of Mark, when anxious parents brought their son, who was possessed by a spirit determined to mutilate and even to slay him, Jesus did not leave the boy in the clutches of demons who caused him to wish to throw himself into the fire to be burned to death or into the water to drown. He would not permit the child to be destroyed, even if it appeared the boy was determined to kill himself. He did not return the child to parents unchanged.
Jesus healed both the Gadarene man and the child. He recognized the distortion of their humanity. He refused to accept their distorted identities. He had compassion on them and restored them to their right minds.

Ah, some may say. The transgender movement is not quite the same thing Christ faced in the cases cited.

Isn’t the destruction of a human being at stake? Aren’t Christians to be part of the healing of those who are insane?
It’s important to remember what happens when we affirm the trans delusion in the name of hospitality.
The human being who decides he or she is the sex opposite of which he or she is born with is—if they continue in their delusion—subject themselves or are subjected by others to tortures so severe that it makes the soul cringe. They are as severely tortured as the Gadarene man who could not stop cutting himself with stones.

No one is saved from masochistic delusion by a Christian who actually affirms the status of a human being determined to destroy himself. If it is not hospitable to start speaking what some deluded soul who thinks he is from Mars and who earnestly believes he is speaking the native Martian language, it is not compassionate to agree to speak his language and thus affirm his delusion.

Christians, it is no divine light or gnostic inner wisdom that has convinced the persons whom you “hospitably” address with preferred pronouns to despise their very being, and to reject the chief marker of their humanity as male or female. Nor are the parents who cheered their child on, nor are the psychologists who help affirm the distorted direction of childish desires; nor are the sadistic doctors who drug and carve up children like mere beasts “hospitable” and “affirming.” The dire end results of a process you affirm by being “hospitable” when you accede to the language of delusion and madness are horrifying. The end result of your so-called “hospitality” is irreversible damage.

No, none of those promoting the madness that is transgenderism are any more “hospitable” and “affirming” than the parents who encouraged foot binding or who encourage female genital mutilation. In fact, all promoters of the mutilators of the flesh share not just lack of love, but even worse, hatred toward the human race. At least the pagan Greeks and Romans recognized and affirmed the beauty of the human body.

Christians are urged to speak the language of God’s love. They are urged to reject the lie and to tear down the strongholds of deception. They are never to speak or affirm the languages of unreality. That is why they cannot affirm a “hospitality” that accedes to the language of the lie. We don’t affirm bedlam or Babel.
On the contrary, we Christians are to speak the truth, to pray for the salvation of the deluded and the tormented, be it mental or physical or spiritual, as all three are related. We are to work toward the healing of the body, mind and spirit as did our Savior Jesus Christ, who as the very Word of God, spoke to all only the language of eternal love and salvation, which language is and will be spoken in the Kingdom of God forever and ever.
Christian Post Source 2/29/20 - Happy Leap Day!

I will never refer to a cross dressing person using the pronoun they prefer while suffering their mental illness. All about tolerance and acceptance? Tolerate that.

my step-father is transgender.
he is, in my opinion, greatly confused and self-destructive. it is out of respect for him that i, alone in the extended family, will not be and never have been party to speaking of him in the lying way that he wants everyone to address him. it seem very clear to me that i would be only further enabling and encouraging him to go on in the lie he lives if i were to. that would be doing him harm rather than good - i will not tacitly approve of his ridiculous behavior by playing along with his sick fantasies and deception.
You must log in or register to reply here.
Share: Facebook Twitter Google+ Reddit Pinterest Tumblr WhatsApp Email Link