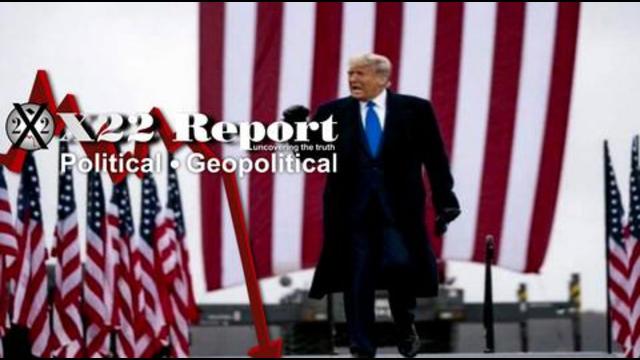 The [DS] is scrambling for the fallout. The patriots have already won, Trump won in a landslide and now he is patiently waiting for the outcome. He knows the [DS] cheated, he allowed it to happen for the world to see. What we are witnessing is pain being delivered to the [DS]/fake news and the corrupt politicians slowly. When this is all done these people will not be able to walk down the streets. The people are rising up, the people are awake, this is the [DS] biggest fear. Victorious warriors win first and then go to war, Trump won by a landslide, reconcile.
Click to expand...

Judge Orders Psaki to Turn Over an Email That “Team Biden” Has Been Fighting Hard to Keep Buried
Biden’s WH spox Jen Psaki has just been ordered by a judge to turn over an email that discusses the “back door” negotiations with Iran and the cover-up of the lie they told the American people.

Here’s the back story from Red State:


THIS IS A REAL TALE OF A DECEPTIVE ADMINISTRATION.
BACK IN FEBRUARY 2013, FOX’S JAMES ROSEN ASKED THE STATE DEPARTMENT’S VICTORIA NULAND IF THE OBAMA ADMINISTRATION HAD BEEN HOLDING SECRET TALKS WITH IRAN. NULAND DENIED IT.
FROM ACLJ:
ROSEN: THERE HAVE BEEN REPORTS THAT INTERMITTENTLY, AND OUTSIDE OF THE FORMAL P5+1 MECHANISMS, THE OBAMA ADMINISTRATION, OR MEMBERS OF IT, HAVE CONDUCTED DIRECT SECRET BILATERAL TALKS WITH IRAN. IS THAT TRUE OR FALSE?”
“NULAND: WE HAVE MADE CLEAR, AS THE VICE PRESIDENT DID AT MUNICH, THAT IN THE CONTEXT OF THE LARGER P5+1 FRAMEWORK, WE WOULD BE PREPARED TO TALK TO IRAN BILATERALLY. BUT WITH REGARD TO THE KIND OF THING THAT YOU’RE TALKING ABOUT ON A GOVERNMENT-TO-GOVERNMENT LEVEL, NO.”
THAT OF COURSE WAS A COMPLETE AND UTTER LIE AS IT WAS LATER REVEALED. THEY HAD ACTUALLY BEEN HOLDING SECRET TALKS BEHIND THE SCENES WITH IRAN FOR SOME TIME.
SO LATER IN THE YEAR AFTER IT BECAME OBVIOUS THAT THAT WAS IN FACT A LIE AND THAT THEY HAD BEEN HOLDING SECRET TALKS, ROSEN ASKED THEN STATE DEPARTMENT SPOKESPERSON JEN PSAKI ABOUT IT.
QUESTION: IS IT THE POLICY OF THE STATE DEPARTMENT, WHERE THE PRESERVATION OR THE SECRECY OF SECRET NEGOTIATIONS IS CONCERNED, TO LIE IN ORDER TO ACHIEVE THAT GOAL?
MS. PSAKI: JAMES, I THINK THERE ARE TIMES WHERE DIPLOMACY NEEDS PRIVACY IN ORDER TO PROGRESS. THIS IS A GOOD EXAMPLE OF THAT. . . .​
In a nutshell, the Obama admin admitted that they lied, but they basically said “F You” America, we did it for your own good.

But things got worse.

Red State goes on to say that Fox then later discovered that exchange between Psaki and Rosen then mysteriously edited out from the video on the State Department’s official website and Youtube channel. Eight minutes including that part and other comments on the Iran Deal were replaced with a white-flash effect.

The Obama administration initially denied it was deliberate, blaming it on a “glitch.” But they later were forced to admit that the very same day of the comments, a video editor got a call from a State Department official to eliminate that portion of the briefing from the video. But don’t worry, even though it was deliberately done and they lied about it being a glitch, they don’t lie, said John Kirby, by then the State Department spokesperson. Nor did they think it was important to figure out who ordered it to be edited because “there were no rules in place” about such things at the time.
J

Are u refusing to answer my question?

Why don't you highlight things from the video for those of us who cannot watch it?

I have to use CCs for the sake of others nearby who don't want to hear anything.

Solemateleft said:
I'll try to provide some notes for the updated videos this evening...
My daughter came home this weekend, so I haven't had as much time to capture the notes...
But I will keep trying to provide you what I can... God Bless...
Click to expand...
@JesusWhereRU I have attempted to address your request with notes added to yesterday's updated videos... I hope this is helpful...

The [DS] is now being exposed. All the fake stories are now turning on them, the viewers no longer believe. The people have become aware and are now awake to what has been happening. The election audits are moving at a very fast pace. Trump says the plan is moving at a faster pace than people realize. The [DS] is panicking, they know once the people see the truth about the elections it is game over. They will push back, see something say something. 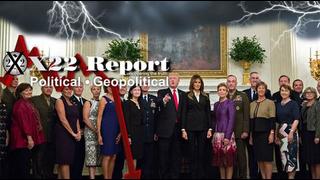 The [DS] is trying to stop the audits, this will fail. The entire [DS] system is about to implode. Trump and the patriots used the [DS] plan and put the players in the spotlight. When the storm hits the people that will be charged with treason will be front and center. The storm is coming, what storm, you’ll find out.

Nothing can stop what is coming.

Here is an example of a Q drop decoded and mapped with a 1 Year Delta... Q has been RIGHT MORE OFTEN THAN PEOPLE KNOW who have never followed nor understood the Military Op Deciphered Decodes..

Q told us that the Military is in Control... Shhh it's been a Secret... haha

The Congress had no clue about any of them ever existing! Some Deep State we have in this presence we live in…
A secret Pentagon project was uncovered. It apparently controls around 60,000 soldiers worldwide who use false names and pretenses.

ACCORDING TO PATRICK BYRNE, MAJOR NEWS WILL BREAK THIS FRIDAY, PATRIOTS! In this EXPLOSIVE and NAIL-BITING episode, the CONSERVATIVE BEAST, Stew Peters goes ONE ON ONE with the founder and former CEO of Overstock.com, PATRICK BYRNE. This MIND-BLOWING interview starts off revealing STARTLING NEW DETAILS from the Arizona Audit, then quickly turns ‘MAJOR HARDBALL’ as Patrick Byrne reveals some SALACIOUS DETAILS about working with the FBI, who stole the election, Italy, Russia, and the infamous meeting with President Trump - AND THE LIST GOES ON AND ON! And just when you thought you heard it all, PATRICK BLOWS YOUR MIND with some more HARD-HITTING facts that VERY FEW people even know about! Get ready for a EPICALLY DELICIOUS, INFORMATIVE WILD RIDE in this EPIC Take-Down of Satan’s Army! 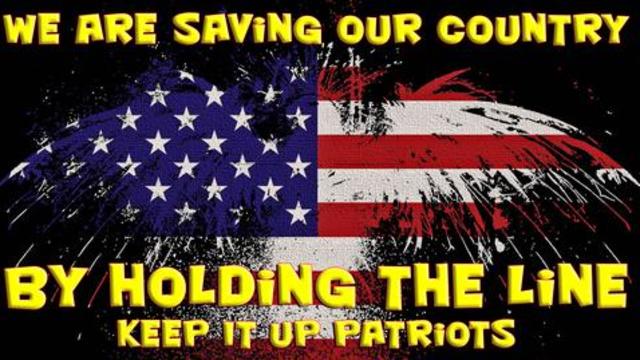 Solemateleft said:
Here is an example of a Q drop decoded and mapped with a 1 Year Delta... Q has been RIGHT MORE OFTEN THAN PEOPLE KNOW who have never followed nor understood the Military Op Deciphered Decodes..
View attachment 228116
Click to expand...
^ yawn.


infowars was on this when it happened,

Q is anywhere from 6 months to year behind.


infowars was on this when it happened,

Q is anywhere from 6 months to year behind.
Click to expand...
When the Patriots/Anons refer to a "1 Year" delta by definition that means that they have mapped a specific Q-Drop and mapped it exactly to a current/future DATE of a significant event that has been validated... Note the May 27, 2020 Q-drop reference on the left- is validated by the May 27, 2021 Impeachment Investigation....

This is only 1 small illustrative example in a library of three years of Q-drops that have been mapped with similar 1, 2, or 3 year DELTAS - validating their once deemed Conspiracy Theories...

IMHO INFOWARS and Q are largely on the same side, page and timing of capturing the Current Events as they occur from a Conservative perspective...

The biggest difference that I can see (based upon your input) is that Q has been projecting that Justice would be coming for all the Corrupt Criminals... and that the MILITARY is in Control... Where the projected downfall of Newsome, Cuomo and Facui etc etc are all part of the Irregular Warfare Q-PLAN and the onset of the Great Awakening and the coming STORM...

DEATH IS THE PENALTY FOR CRIMES AGAINST HUMANITY (rumble.com)

I guess the makers of those videos do not care about

guess we won't be watching these videos.. no CCs 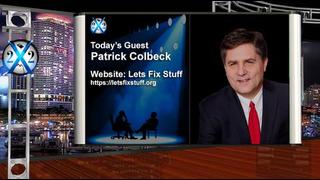 Patrick is an aerospace engineer, author, former elected official, and former candidate for governor in Michigan. Served Two 4-yr Terms in Michigan Senate. Patrick was on the frontlines during the elections, he was a poll watcher. He describes how he noticed that the Dominion system was connected to the internet and when he questioned this they told him to not to worry about it. Patrick is on the front lines auditing the Antrim country elections. He has found that the systems are connected to the internet via a cell phone chip. Ballots were dropped off in the middle of the night with no chain of custody. Other software was installed on the voting machines which were not certified. Once fraud is produced the elections will be decertified.
You must log in or register to reply here.
Share: Facebook Twitter Google+ Reddit Pinterest Tumblr WhatsApp Email Link