"Do you feel the world is broken? We do.
Do you feel the shadows deepen? We do.
But do you know that all the dark won't stop
the light from getting through? We do."
~ Lyrics by Andrew Peterson from Is He Worthy?​
CHINA: Church in Exile Faces Repatriation
Sources: VOM Korea, ChinaAid, Christian Solidarity Worldwide 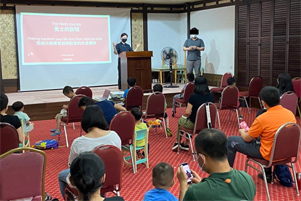 Dr. Foley teaches the "Mayflower Church"
how to Biblically respond to persecution.
Photo: Do the Word
​
After enduring years of persecution in China, most members of the Shenzhen Holy Reformed Church, led by Pastor Pan Yongguang, fled the country in 2019 and sought refuge on JeJu Island in South Korea. These 60 Christians (consisting of 28 adults and 32 children) have been supporting themselves by doing menial labour during the asylum process. Human rights advocates have dubbed this group of believers as the "Mayflower Church" for their similarity to the pilgrims who fled England in 1620 due to persecution.
During the past two years, The Voice of the Martyrs Korea has been involved in the training of these mentioned church members, teaching them how to effectively respond to persecution in the event that they are forced to return to China. Advocates believe that, if the Christians are repatriated, they will likely face extreme punishments – including imprisonment, forced disappearances and torture. Chinese agents have already interrogated members of the church who have chosen to remain in the country. Commenting on the present situation of his group of Christian refugees, Pastor Pan lamented, "There's no way back for us."
Despite various appeals, the asylum seekers' application for protection in South Korea has been repeatedly denied. The church recently discovered that their second appeal has been turned down, prompting concerns that they may well be forced to return to China. There have been various calls on the American government to grant refuge to the group of believers and, according to Dr. Bob Fu from ChinaAid, several churches in Texas have announced their willingness to receive the congregation if the resettlement is approved.
As the Christian refugees and their concerned advocates around the world now await a decision, Dr. Fu remains hopeful: "We quietly await God's great deeds." For more information on the persecution facing Christians in China, go to our country report.
Pray that our persecuted Christian brothers and sisters who are seeking asylum will be granted a safe place to raise their children in the ways of Christ, all the while experiencing His divine provision, protection and peace. May the Lord also mightily intervene within the hearts and minds of the governing leaders involved, moving them to respond with compassion to the plight facing these believers so that the best decision will be made in their favour. Additionally, prayerfully uphold organizations such as VOM Korea and ChinaAid that are advocating on their behalf, as they faithfully continue working to both encourage this church group and seek a resolution. May these advocates receive wisdom and guidance through the empowerment of the Holy Spirit as well.​
MYANMAR: Christians Targeted by Governmental Forces
Sources: Church Times, CBC, Al Jazeera, International Christian Concern 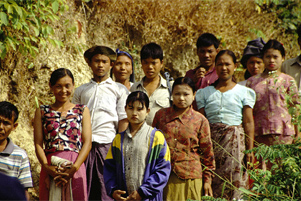 The Chin people group consists
of a large Christian population.
Photo: Flickr / CortoMaltese_1999 (cc)
​
For many years, warring factions have caused issues throughout the country of Myanmar (also referred to as Burma). While most members of the population are Buddhist, some tribal groups such as the Chin and Karen peoples have large Christian communities. There is also a significant Muslim population among the Rohingya people.
Tribal and religious tensions within Myanmar have been evident for many years. In 2017, hostilities came to a head for the Rohingya people, causing many to flee to the neighbouring country of Bangladesh to escape what has been described as "ethnic cleansing" by governmental forces. The global response to that situation has been significant.
This past February, a military coup overthrew the democratically elected government. In the aftermath of the political takeover, there were concerns of increasing levels of violence being perpetrated against the country's Christians. These suspicions have since proven to be accurate. As the military turns their attention to rebel forces fighting in Chin State, as well as other areas where rebel groups have been opposing the military junta, the violence seems to be targeting Christians. This is leading to fears among human rights activists of an ethnic cleansing, similar to what has been taking place among the Rohingya people.
Church congregations, along with their leaders, appear to be particularly targeted by Myanmar's military forces. For example, a Baptist church and several residences in the village of New Thlanrawn were vandalized on October 16th. According to the villagers, the military first attempted to burn the buildings, but the structures were too wet from the rain that occurred. Furthermore, in the town of Thantlang, Chin State, more than 160 buildings were destroyed, including at least two churches. When Pastor Cung Biak Hum attempted to intervene, he was killed during the raid. Afterwards, the attackers removed the pastor's finger in order to steal his wedding ring.
On November 9th, a Catholic church in Pekhon, Shan State, was attacked for the second time within six months. While no one was injured in this incident, the church's windows and furnishings were damaged. Three days earlier, the building of a nearby convent was also ravaged.
Benedict Rogers, a human rights activist with Christian Solidarity Worldwide, describes there being a "deep-seated hostility" within the country towards non-Buddhist religious minorities. When speaking to an Al Jazeera news reporter, he stated: "[The military] have often used religion as a tool of repression. They have sowed religious nationalism, and that has been the case for decades." He further explains that, since the coup, these patterns have only intensified: "Christians have certainly been targeted, both for their religion and their ethnicity." To read previously posted reports on the persecution of Christians in Myanmar, and/or to view brief video documentaries, go to our country report.
Please pray that Myanmar's Christians will serve as agents of God's peace in the midst of the violence. May the destructive actions of the military that are being directed against these targeted followers of Christ ultimately cease. In the meantime, prayerfully uphold the many believers who have been forced to flee their homes, as well as the churches that have had their properties destroyed. Ask our Heavenly Father to abundantly provide for their practical needs, comfort them with His presence, and imbue them with strength so they will not only persevere, but victoriously overcome every onslaught of the enemy through the power of the cross.​
T 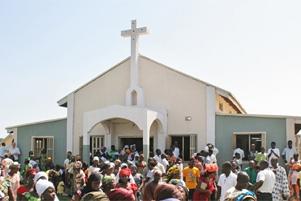 Ask God to provide peace, protection
and comfort to Nigerian believers.
Photo: World Watch Monitor​
Although the details are limited at this time, it has been reported that armed bandits have killed two of the worshippers who were abducted from the Emmanuel Baptist Church in Kakau Daji village on October 31st. (More details on the recent abduction have been made available here.) Rev. Joseph Hayab from the Christian Association of Nigeria announced in an official statement that the gunmen opened fire on five of the kidnapped Christians, killing two and injuring the other three.
In an earlier interview, Rev. Hayab stated that "the Baptist church is the worst-hit church" in the country's Kaduna state. In July, 121 students were kidnapped from the Bethel Baptist High School in the village of Maraban Rido, which is also located in the state of Kaduna. (For more details, see this report.) Rev. Hayab described the situation in Kaduna by saying, "Surviving as a Christian, and especially as a Christian cleric, in Kaduna state is largely by the mercy and grace of God if you are in these vulnerable communities."
Continue to fervently pray for all the surviving victims remaining in captivity, whether the crimes committed against them be due to religious reasons or strictly for financial gain. May the Lord also comfort the families of these victims, including those who are mourning the loss of slain loved ones. Ask Him to fill each broken heart with His "peace that surpasses all understanding," unexplainable spiritual joy in the midst of difficulties, and the overcoming hope that His greater purposes and righteousness will ultimately prevail. The greatest miracle yet to be fulfilled in these unprecedented days is that of spiritual revival. Pray for the Lord to move by His Spirit throughout Nigeria – transforming the hearts of governing authorities, as well as the perpetrators of terrorism and other crimes against humanity, and all who are seeking a personal relationship with their Creator... the One True God.​
C

Lord, watch over all our brothers and sisters all over this earth. In Jesus’ name I pray. Amen

Good post.
---
There are many 'restricted' countries..in the world.
- Going through 'severe' persecution..
---
More of His comfort to Christians/leaders..
- China, Myanmar & Nigeria.
Z

I have prayed for those who are facing persecution. God bless you

Lord we pray for persecuted Churches and Pastors and believers. Lord your presence be with them and bless them as they need you.Lord please bless this prayer request, in Jesus merciful name, Amen!
You must log in or register to reply here.
Share: Facebook Twitter Google+ Reddit Pinterest Tumblr WhatsApp Email Link