Funniest things in your church..

Has anything really funny ever happened in your church?

When I was a kid, a rat ran behind the pastor while he was preaching and a lady screamed in the congregation. The pastor said, "yes sister let the spirit lead you." LOL The pastor laughed about it once he figured out what happened.

Was thinking it would be entertaining to hear about others funny church stories.

Well there was the one time that we had a guest preacher at our church, and he asked the congregation if they had any prayer requests, and the little girl who often asked for prayers for her pets had one because one of her small animals ( don't remember if they were guinea pigs or hamsters or what) had become pregnant and she wanted the babies to be okay and was particularly worried about it because the parent critters were siblings.

And boy that preacher prayed such a huge prayer for guidance and emotional healing and God's grace and restoration to happen in the lives of these poor scarred incestuous rodents.

It was all I could do to keep from bursting out laughing while he was praying, and you really didn't want to laugh because you knew that someone somewhere probably was in that terrible situation he was praying about, but it sure wasn't these rodents.
K

#3
The sermons are sometimes funny.

A visiting pastor made the point at one time, that you can't please everyone and their will always be someone to criticise your actions.

For eg, if the pastor drives past persons who are walking, they'll say pastor was being selfish in not giving anyone a lift in his car.

But if he was to be seen giving a woman a lift, those same people would say that there is something fishy going on.

It was funny in a way. Well, a member of the church I used to goto, invited me to play bass guitar for one of the worship teams. Well, the member wasn't really that good on guitar, so not sure why he was in the band in the first place. Anyways, one of the songs during worship service he really blew it, he played the song to fast, and it messed the timing of a song. Can you imagine a train wreck during the worship service? That's what happened, it was like watching a building fall down.

The second service the head musician from one of the other church bands took over and played the guitar for him. It was really bad, but still it was humorous in a way.

This was an easter outdoor function, many different religions were present. Up on stage was a cross made by the congregation, two pieces of oak bolted together on a stand . As we were sitting in the park, the priest was sharing a story of how a lady of his congreation died of cancer and she could have have been a model apparently. This priest was blaming God for her demise and questioning why he does such things, as he was speaking the cross fell apart and fell to the ground backwards! There was quite a gasp in the audience from some people , including me.
K

#6
Gregoryp said:
This was an easter outdoor function, many different religions were present. Up on stage was a cross made by the congregation, two pieces of oak bolted together on a stand . As we were sitting in the park, the priest was sharing a story of how a lady of his congreation died of cancer and she could have have been a model apparently. This priest was blaming God for her demise and questioning why he does such things, as he was speaking the cross fell apart and fell to the ground backwards! There was quite a gasp in the audience from some people , including me.
Click to expand...
Did the priest ran off the stage?

Kim82 said:
Did the priest ran off the stage?
Click to expand...
He did leap in the air lol. But kept preaching, this was Easter Friday, so many non demoninational people were there btw.

#10
I remember this young Pastor like 15+ years ago One nice evening church service he was again there doing his regular thing ...preaching passionately the word of God when suddenly his dentures came out and fell...good thing he managed to put it back quickly ...everyone was holding themselves not to laugh some can't hold back 😁 he was too embarrassed and his face was full red 😅

We have a man in his sixties in our church who has dementia. He often says what he thinks or feels without reservation. Usually people
gasp, get embarrassed or laugh. It is due to his illness. One day we had a visiting pastor who was a little famous. Everyone crowded into the church with this guy with dementia sitting on the front row.

This guest preached often screaming and yelling (I really can't stand when they do that. I understand being passionate but it often is more of a production and show). Anyway, he was screaming away with the audience responding with Ah and Oooh. I was sitting at the back and thinking God does he really have to scream like this. Sometimes people think the more you scream the more anointing or something there is. It's like when you watch a singing talent show or something and the singer screams (often going off key) and everybody claps. I don't get it. Their screaming and they have gone off key because of it lol.

Anyway this guy was screeching away and finished his sermon and asked if anyone had any questions. The guy with dementia put up his hand and said quite annoyed " Have you finished yet because you have gone over our lunch time and I am very hungry" Well this poor guest did not know how to respond. He just stood there. The wife of the dementia guy was trying to quieten him down and he kept saying " when is he going to finish,it's past our lunch time". No one knew what to do. I of course was trying desperately not to laugh and the more I tried the more it seemed impossible. 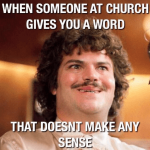 hmm I cant think of any howlers off the top of my head but I notice some preachers try to joke around in the pulpit all the time. I just dont have that type of humour and dont always laugh at their jokes. sorry!

my embarassing thing is when Im worshipping and I notice that my friend next to me is singing way out of tune. I cant be within earshot of her cos her singing is really bad. I dont know how to tell her she cant sing, cos if shes tone deaf theres really not much I can do about it! I am just thankful shes not up the front with a microphone.

If she were up front with a mic, don't worry. The sound man would have her mic turned down. I've had to do that before.

A heart at rest

My Pastor is from the Chzeck republic and has a thick accent.
He tries very hard to pronounce words correctly but sometimes he makes an "oopsie".
He was preaching on Psalm 139 a few years and was quoting vs 13.
"You made all the delicate, inner parts of my body and knit me together in my mother’s womb."
He accidentally said "all the delicious parts of my body".😂😂
His wife and I locked eyes and had a good laugh.

When I was younger... a young preacher friend was preaching on the radio and mentioned this verse.....


Exodus 2:39
And the LORD said unto Moses, I have seen this people, and, behold, it is a stiffnecked people:


Except he kept saying "stiff naked people"
We are from the south...so he was saying necked but it was coming out nekked (naked)


Another young man was talking about the ewe lamb, but instead of pronouncing it " you lamb" he was literally saying "e-we"
D

This did not happen in a service I was in but my college roomate told me about it and I never forgot. In one service both times the paster made a verbal slip up. When it came time for the offering he wanted to have everyone bow their heads in prayer before passing the plate and instead of "let us pray" he said, "let us pay." Then as he was closing the service with another request for bowing the heads in prayer he said, "let us play." She said that at the last one they could no longer hold the laughter in and the church howled.
D

There is another one told to me by a friend. It was in one of those churches where people speak out a word of the Lord at times and one well-meaning brother felt led to say something based on this scripture,

She named the boy Ichabod, saying, "The Glory has departed from Israel"--because of the capture of the ark of God and the deaths of her father-in-law and her husband.

What he wanted to give was a warning that the Glory of the Lord has or will or is departing but what came out was,

"And I say unto you, sayeth the Lord, Michelob, Michelob!!"

The church lost it and all but rolled on the floor with laughter. 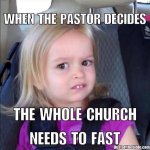 My good friend's wife has a habit of saying "Awww man" everytime something happens that is frustrating or annoying or even surprising. She says it all the time. Their little girl Katie and family was at church when the Pastor ended his opening prayer with Amen and Katie yells out Awww Man!

A second one was a story related to me by friend, but apparently it was Easter Sunday when the pastor gave a children's sermon to the little one's. As they gathered around the pulpit the Pastor sat with the children with his microphone and turned to one of the children and commented on how beautiful her Easter dress was. The little girl said (over the microphone) "Mommy says it's a [email protected]# to iron".
You must log in or register to reply here.
Share: Facebook Twitter Google+ Reddit Pinterest Tumblr WhatsApp Email Link