tourist said:
I'm sorry to hear that but please take comfort in knowing that the Holy Spirit prays to the Father for you all of the time. Glad to have you join us. Welcome to CC.
Click to expand...
Ty

I don't consider it prayer, i consider it reading. The only way i would see it as prayer is if that person took those words and started
to affirm what they were reading in agreement with and to God. Usually when a person reads something they are doing just that, reading. Same thing when people recite what they read, they are doing just that, reciting.

As for prayer i don't do it as much as i could, but im working on that.
I have prayed for people to be removed, i remember i prayed and affirmed that God would and has removed a person from out of my circle. The guy moved in a few days, and for a solid week nobody heard from him. He eventually came back again and started causing trouble again but not as much. I prayed the same thing again, not too long after he got kicked out completely, now we don't see him for months at a time. He has completely stopped causing problems even when he does make his short appearances.

Another example is the time i prayed for my sisters ex boyfriend to leave. He was causing everyone problems and making threats and whatnot. My initial response to that was not exactly christian at first, but then i understood that God might have a better plan than mine. I had to do something which was difficult for me at the time, which was to forgive him. After doing that i prayed for him to go to where he needs to go. And for him to be with someone who can tolerate him. A week later this guy legit up and leaves after bullying my sister and talking about forcing himself back on their apartment lease thing. He was still on the old lease for 5 more months, but he ended up leaving a week after that prayer.

Weeks later i find out from someone that he is living with and in a relationship with some older woman. I laughed out loud when i heard the news because when i prayed for him to be with someone who can tolerate him, the image that popped in my mind was a mom, because guy lives and acts like a boy. That plus he acts like he needs someone to mother him.

Another example is when i was talking about money and God with 1 of my friends. I forgot the entirety of the discussion but it was something on the lines of how God can and will use things as mediums for His will. I left the room and came back with a crumpled up 1 dollar bill, set it on the table and said something to the effect that Gods truth will manifest even through something as simple as this. The belief was simple, God uses things as mediums to forward His will, i believed He would do something with money, and that 1 dollar bill i pulled out was just a physical representation of that idea. My friend i both agreed, and carried on, went off topic onto some other stuff and pretty much forgot about it. The next day a person i had given a grand to months ago, and had forgotten about showed up and gave it back to me at the same hour i said/ affirmed that prayer the day before. It was funny because they said they were having money issues but they were just going to give it to me anyways. The moment they gave it back they kept getting random notifications from their bank and paypal apps, money being refunded and it all came back to them for exactly what they needed.

Those were just a few random testimony's you might find encouraging because prayer does work.

posthuman said:
the scriptures say, 'pray without ceasing'
and they also say, 'aspire to live a quiet life, minding your own business and working with your hands'

these aren't incompatible. this means, you can pray and work with your hands simultaneously. you don't have to be assuming some certain posture or lighting candles and burning incense in a special room, lol - if you can 'pray without ceasing' then you can pray no matter what else you are also doing; otherwise the instruction to be constant in prayer would imply doing no other thing but folding your hands and kneeling, eyes shut, your whole life. many of us are taught to pray this way, but it's not 'requirements or else it's not really prayer'

there's nothing God doesn't see or hear
Click to expand...
That is a wonderful encouragement, thank you for sharing that. I do tend to view prayer as kneeling beside my bedside....however I do that for myself, to assume a humble posture.

I know that in Mark it says "And when you stand praying, if you hold anything against anyone, forgive them, so that your Father in heaven may forgive you your sins". I took comfort in that passage because at 50+ my knees aren't what they used to be and kneeling in prayer can cause pain or at least discomfort and I find it hard to center myself when I'm not at ease....however I find kneeling puts me in the right frame of mind to come to God.

Prayer can change the heart of God in any situation. Ask and ye shall recieve! Pray without ceasing. This is our intimate moments to share ALL with Him and to listen! He is faithful and just to answer our prayers,but it will be IN HIS WILL AND HIS WAY! 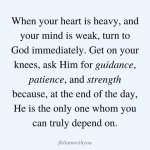 #67
IFOLLOWHIM said:
View attachment 206700
Click to expand...
Well you can't depend on earthly men, that's for sure 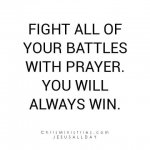 Tasha are you troubled,Sister?
T

#69
IFOLLOWHIM said:
Tasha are you troubled,Sister?
Click to expand...
Nah, I'm OK. Just tired of being let down by men; actually I'm just really tired right now! And it's not like I go out & invite them into my life. I spent most of my time last year trying to avoid men & women, except two people who were friends of mine & everyone elses at the place I was staying at for work.
I find men so unreliable. They all drink to excess - most men I've encountered in my country (& from overseas) drink too much. I would say most of them are alcoholics. And they all love their dope, and are probably on ICE too. ICE is a huge problem down where I'm staying.
As I've said in other posts, it would just be nice to meet a man to go out to the cinema occasionally, or for a meal/coffee/glass of wine.
But men don't want to just be friends I've found. I think it's a shame men & women can't just be friends.
Better go make my arvo coffee to wake me up!!
Thanks for your concern IFH!

I do understand,I've been divorced 14 yrs and been a family caregiver since I quit Nursing!!
This day guys my age are happy not to have a wife and only want someone at THEIR convience!
I tried to date again this time last year but can't find someone who loves God like I do and want the same things in life!
I will just wait on Him if it's His will,if not,it's ok too! It does get lonely though!
Keep your chin up ,Sister He is always on our side!
Get some rest!
Blessings
T

#71
@IFH: Oh are you a Nursing Sister? So am I! I'm a Registered Nurse of nearly 12 years now, but have been in health care for about 36 years now. What area/s did you work in?
Isn't that weird.
Caregiving at home is hard - kudos to you. I will have to go home soon too for Xmas. My Dad isn't well, he may need his right Internal Carotid Artery stented - it's 70% blocked, & he's now a NIDDM again, so that is a worry. He had a post-prandial hypotensive attack last year, and after he had MRI scans done, they found an old right frontal lobe infarct as well. So he's had a CVA at some stage. He's probably had a run of TIA's leading up to a stroke, which isn't good. His personality has changed as well, he isn't how he used to be
I have too many other things to worry about to bother about dating, & don't want to date full on, but a wee coffee or a meal every now & then wouldn't go astray. I miss my ex-bf's company, as he was my best friend, a great cook and always offered great advice.
I just made a coffee, so that should pick me up. Sometimes I think it's the Devil's Brew lol.

Yes I was ,my field was Geriatrics and I also did private care throughout!!
I started as an Assistant when I was 18,so I have been at it my whole life it seems!
My family is grown pretty much now and really have less need of me,so I end up taking care of the greats being born........love them babies!
I am sorry your dad is in such poor health!
T

#73
IFOLLOWHIM said:
Yes I was ,my field was Geriatrics and I also did private care throughout!! I started as an Assistant when I was 18,so I have been at it my whole life it seems!
My family is grown pretty much now and really have less need of me,so I end up taking care of the greats being born........love them babies! I am sorry your dad is in such poor health!
Click to expand...
Thanks for taking time out of your busy day to care, and for your kind thoughts.

There was a woman who had a difficult boss that if she had someone difficult in the workplace, she prayed that God would bless them with a better job elsewhere. I believe this was in the context of a discussion about her boss getting a job elsewhere. Sounds like a nice way to handle it. I'd prefer that to praying death and curses on people.

My wife got really hard to deal with during one of her pregnancies with one of our children. She'd get upset over the slightest thing, and one night she got really upset over the most innocuous comment, it did not make sense. So I prayed this really long detailed prayer about things I wanted the Lord to speak to her about. A few days later, she asked me to sit on the couch next to her. Uh-oh-- did she want to fight again? No, she seemed nice. She told me I was a good husband, that she was sorry, and then she told me the Lord had spoken to her about some things. The prayer was so detailed, and the things she talked about were like a page for every point I prayed, even more detailed than my prayer. This really changed her attitude completely toward me, and that was a much better pregnancy afterward than it had been before.

God alone can change things! Our prayers can sometimes change His heart! 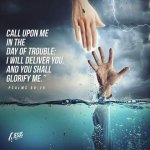